Over the years I have received hundreds of letters and emails for men asking me what Arginine (technically L-arginine) is and what effect, if any, it has on sexual potency.

Due to such an interest I shall attempt to briefly explain the basics of the arginine effect and it’s relation to male potency.

Arginine is used by the body to produce Nitic-Oxide (NO), which improves overall systemic circulation. Systemic means that it positively affects your entire body. Better circulation will increase performance of your brain, heart, muscles, skin & hair, digestion, immune system … and of course your little best friend, so he can function when it counts.

Here is a great short video of what circulation is and how important it is:

In fact, the Nobel Prize for Medicine in 1998 was awarded to the team of researchers, who showed how NO is able to improve circulation. Incredibly, they used the erection as the example to base their research on! One of the nobel laureates, Dr Luiz Ignarro then went on to write a best-selling book on Nitric Oxide detailing its amazing benefits to the human body as a whole.

Also, since Arginine has been associated with the Nobel Prize its effect on male potency has been well-researched in dozens of scientific, randomised, placebo-controlled and peer-reviewed studies. In fact, no other potency enhancer has been clinically proven effective.

Arginine is therefore highly recommended for anyone, who has a hereditary or lifestyle risk to contract or who already struggles with cardiovascular disease. This obviously includes sufferers of impotence / erectile dysfunction (ED).

In fact, Dr Iganrro’s research directly led to the development of Viagra, a so-called PDE5 inhibitor.

PDE5 inhibitors work by temporarily *blocking* a substance in the penis called cGMP, which is the neurotransmitter for 5GMP for 4-8 hours. 5GMP causes the penis to *deflate* when an erection is no longer needed. cGMP is a so-called phosphodiesterase (PDE) enzyme, which is why they are called PDE5-inhibitors.

Arginine on the other hand increases your sexual function naturally. It improves your body’s NO levels and therefore natural ability to expand its blood vessels and flood blood into the penis.

The improvement in the erection, however, is much softer and  usually takes some weeks to take effect – but then it is permanent!

Natural & without side effects

One important note is that unlike chemical PDE5 inhibitors, Arginine has no known side effects and its effects is basically permanently on stand-by, or “always-on”. Personally, I have tried several PDE5 inhibitors, but several times experienced side effects. I had some of blushing and mild headaches once I had popped the pill and was ready to rumble.

Firstly, it is important to realise that L-arginine is a “semi-essential” amino acid, which our bodies need to function properly. This means our body makes Arginine by itself, but sometimes it simply needs more than it can make.

In this case we then have to make sure we include enough Arginine in our diet to satisfy the increased need.

It is important to recognise that only relatively high doses of 3,000mg (3 grams) and above will achieve the desired effect of actually elevating its levels in the blood plasma.

Thankfully this is no problem, because our body is used to ingesting this natural amino acid every day in different amounts. Your stomach won’t have problems even with large doses of 15 grams or more.

The minimum threshold amount is thought to be 3,000 mg daily and more is probably better. Any less that that and the Arginine will have no effect on NO production (no pun intended).

Unfortunately, most supplements on the high street do not contain these amounts and are therefore not effective at all. So, when choosing an Arginine product, do stick with brands, which have designed their products with large dosages in mind. Do pay particular attention to the quantities of Arginine contained in them.

Arginine is available in capsule and powder form. Although the powder is slightly cheaper, I have experienced better results with capsules. Not only are the results more noticeable, capsules are more portable, easier to take during the work day and you don’t need to put up with the bitter taste of arginine powder, which is not for everyone.

Many manufacturers also include other nutrients in their Arginine products in order to differentiate themselves from the competition. These range from Vitamin B complex, Carnitine, pine bark extract and folic acid to Ginseng, Ginkgo Biloba and zinc.

Of these, the most sensible and research-backed are

How to consume Arginine

I have been taking 3,000 mg Arginine in capsule form split over two doses per day. That is 1,500 mg in the morning and 1,500 mg in the evening. Splitting the dose does two things: it improves absorption levels so your body actually ingests more of the good stuff (it does not always!). Secondly, the nutrient supply is more continuous. That means the available Arginine in your blood stream is more consistently elevated and does not peak and trough as dramatically.

Do add Arginine-rich foods to your every day diet. Although red meats contain lots of it, generally I would try and avoid it. Better is fish, white meat, spinach and walnuts – but you may struggle to get to the minimum amounts every day unless you want to eat a steak or 150g of Walnuts every single day. This is not sustainable.

Arginine alone is not enough

Early studies concluded that “a dose of 5,000 mg (5g) per day of Arginine does not have a satisfactory effect on treating erectile dysfunction” as only 31% of subjects reported improvement. However, when the Arginine was combined with 80mg of Pine Bark Extract per day, even a smaller Arginine dose equivalent to about 3,000mg (3g) per day cured the erection problems in 92.5% of male test subjects. Click here to read the clinical study (opens new tab). 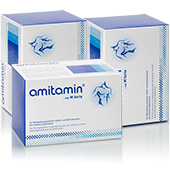 Basically, the Arginine and Pine Bark Extract reinforce each other’s effects. They are the erection-boosting “Dream Team”!

My three favourite products are amitamin m forte, aminoexpert VIGARIN and Pharma Nord’s Prelox. They are the only ones I could find, which include both Arginine and pine bark extract. Of these three, VIGARIN and m forte are made in Germany. I prefer this slightly over Prelox, which is made in the US by a Danish company.

There are several similar products like Arginmax, Orthroexpert ProMan or Androxan, but they either include different ingredients (never Arginine in combination with Pine Bark Extract) or they are more expensive. 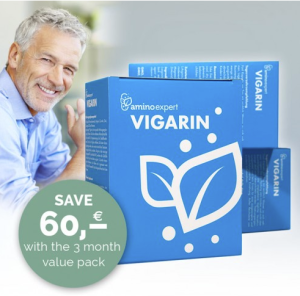 Arginine does takes some time to work – roughly 3-5 weeks or so until you notice the full effect. Then I would take it for at least another 3 months or so to make sure your body fully loads its NO storage.

If you get used to the benefits you can take it as long as you like, because there are no side effects. The effect of better circulation is holistic and has this slow onset, but nonetheless it is highly likely it will contribute to increasing your potency.

To put it simply, achieving an effect on erectile dysfunction takes time and patience.

But you are improving the health of your overall system – so it is worth it!

For yourself and your First Lady 🙂